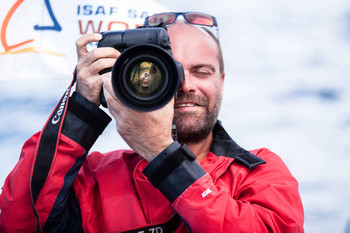 Nikos Alevromytis was born in Athens on May 23, 1977. Since his school years he remembers himself taking pictures at every opportunity. He graduated from the 3rd High School in Nea Smyrni and studied Business Administration at the Aegean University in the island of Chios. In the same university he completed his postgraduate studies in Design, Management and Tourism Policy.

Being always an active spirit, he continues his artistic pursuits and along with photography he participates in musical bands in artistic places while being in Chios and afterwards at the International Music Festival in Belfort, France (F.I.M.U.).

After returning to Athens his involvement with sailing drew him to the sea and through this he got the opportunity to work as the official photographer of the Hellenic Class Platu25. And this was the landmark for his career! He has finally found his true call as the constant struggles give him inspiration for new trials and quests! The sea world has gained a real artist!

Apart from shooting sports, Nikos shoots street photography, fashion photography, Yachts interior photography, hotel interior photography or he just enters the studio, photo shooting friends, models, and actors, focusing especially on the dramatic portraits. He likes experimenting with colours but also with black and white. His imagination and excellent perception have given him the opportunity to create small works of art!